I received my new Tim Holtz Alterations dies this week. The halloween dies are being released in a short burst and then, once sold out, won't reappear until after the turn of the year. I was worried that I was not going to be able to get hold of any but luckily one British company had them on pre-order. Yippee! So, when they arrived on Tuesday devoted the day to playing with them. I only ordered the Witching Hour and Raven/ Scaredy Cat dies (along with Reindeer Flight which I have to wait a little longer for) but guess who is regretting it now? I have already decided that I need the row of houses, the Once Upon a Time alphabet die and at least one of the Texture Fade embossing folders. It's just as well my birthday isn't too far away.

These are some of the tags I made this week. Lots of distress ink and alcohol ink - not to mention plenty of mess. But that's the fun of playing. 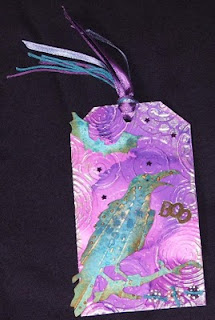 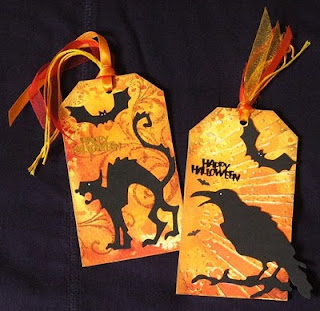 Posted by Gillian McMurray at 16:33

Love these! The texture fades and those dies together are grand! Love the colors you used, too!