Craft of the Month - Inkle Weaving 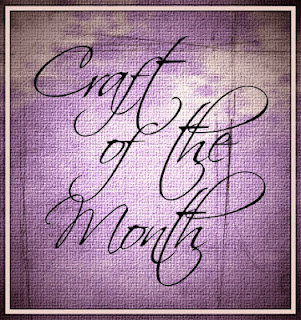 Weaving is one of those things that seems to flow from knitting and crochet, through spinning to its own delightful end. For some people, including myself, the act of making fabrics seems to start from the easier (and cheaper) crafts like knitting. Then the desire to make more and more fabrics might spill into the desire to spin your own yarns - be it wool, cotton or any other spinable fibre. Refinement of that desire might then end up with weaving. In my view it is the 'ultimate' in fabric production. It is where you can produce fine, soft, more practical and usable fabric unlike anything that knitting and crochet can form. However, it can be quite complex to learn, need time to learn and space to practice and is not a cheap craft to begin. Small, table top rigid heddle looms looms start at £135 ($150 US) and full size looms rise to thousands of pounds or dollars. As a result many people start with a small loom like an inkle loom. They are small table top looms that cost from £35/$63 This was my departure point for weaving. 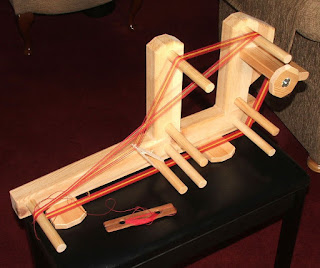 Obviously I needed to find out a bit more about how inkle weaving worked. I ordered a couple of books from Amazon which are great - The Weaver's Inkle Pattern Directory by Anne Dixon and Card Weaving by Candace Crockett - but sometimes you need something a little more user friendly. So I hit the internet.

It turns out that inkle weaving is basically a way of forming woven bands by raising and lowering the warp threads on the loom. OK, nice and simple. I found lovely written instructions on how to weave on an inkle loom can be found at Weavezine.com. The article describe the process so much better than I could. But for those who prefer to see things in motion, one of the best videos I found on how to warp and weave on a loom is at YouTube. Also on Weavezine (which is worth a read through for lots of fun weaving projects and inspiration) is a great purse project for using the inkle loom (and proof that it doesn't have to be all about belts). As always Interweave has proven to be a wonderful treasure trove of information too. Their site for Weaving Today magazine has free information, projects ideas and a forum where you can chat with other new and established weavers.

The first time I sat down to weave I was nervous. Not that it is complicated in any way but I am a perfectionist and wanted to create something recognisable and not horribly deformed. Well, guess what? Within fifteen minutes I was producing a narrow band of weaving that had even tension, and recurring pattern and the weft threads were hidden beneath the warp threads rather than being exposed and uneven. I have to admit that I have not been able to weave as often as I would like due to family issues and work. But I have a feel for weaving. If there is such a thing as reincarnation then I must have been a weaver in a former life. It felt natural, relaxing and like I was born to weave. You can weave bands up to four inches wide on the loom I have but I have only woven thin bands about an inch wide so far.

Once you become a bit more advanced you can add weaving tablets to the loom to expand the patterns you can create. You can see how to warp a loom with cards here. Being an ancient history buff I love this short video about creating Roman style textiles with tablets. She does not use an inkle loom but the principle is the same.

Using the inkle loom is just my first foray into weaving. I would like to take it further at some point and try a larger loom but I still have a lot to learn about weaving before I get to that point. But as a taking off point I can highly recommend trying an inkle loom.
Posted by Gillian McMurray at 11:38

Email ThisBlogThis!Share to TwitterShare to FacebookShare to Pinterest
Labels: Craft of the Month, inkle loom, weaving