Way back in February I began a collaborative project with Seth from The Altered Page and over a hundred other artists. You can read about the earlier exploits here and here . The climax of this is to be a display of projects created from the disintegrated papers. After the big reveal of grunged up papers in May I actually left mine out in the elements as they hadn't disintegrated very much. Hardly at all - except for the puppy teeth marks from my sister's dog who felt it needed some extra help. Look what happened during the last three months. 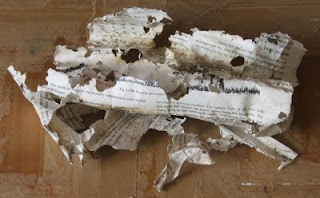 Out of three rolls of paper I got a page and a half that was usable. One roll was filled with creatures that had made it their home so I left it in situ - insects need a place to call home too. Another had a small snail living up the inside but I gently removed it and found it a new home in the undergrowth. The rest had disintegrated through the action of insects, birds and possibly rodents chewing it for bedding. I am amazed that so much 'damage' was done in three months of summer when little effect was seen after three months of rain, hail, sleet, snow and sun between February and May.

So, now for my pictures. I made a few items that I felt fitted the DiSco theme - an ATC (even the paperclips and strings were out in the elements with the paper rolls), a couple of inchies, two beads and a 3x1 inch Memory Frame filled with collaged papers. 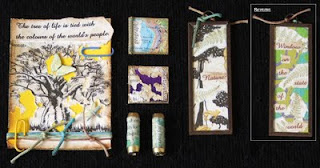 Update: It seems the picture of my DiSco goodies won't enlarge. I can't figure out why so I will try to photograph them again and re-post a picture later. Apologies for the inconvenience and thanks to everyone for commenting.

Posted by Gillian McMurray at 12:13

Your art looks very interesting! It makes me want to see it up close as well!!! ;)

It's interesting how much more it disintegrated in the summer. It's wonderful how many pieces you got out of what was left. Nice work.

Wow....you really had disintegration! I love the finished piece!

love the pieces you made (would love to click on the photo to see it enlarged), the weathered paper looks yummie, so to speak :)

I love how pretty the disco papers look in their final state!

Lovely what you've created Gillian, so many special creations, I too was leaning in to the screen :)

Hello from Wales! have just returned from Ednam!!! What a lovely area. What fun we have all had in this project.

I wondered how things would fare in the summer! Surprising and fun. - Jeanne in Oregon

You got some GREAT disintegration!! I love what you did with your pieces too!! Great final reveal.

whoa! inspiring completion to this distintegration...
i like that you kept it simple
and the backing it up ...good
just plain good

How lovely! I like your rectangular framed pieces. Amazing what can be achieved with 'Scrap!'

I'm a bit late in getting around to everyone's DisCo project, but I was totally impressed that yours disintegrated more in the summer than in the winter. I too had little disintegration from Feb to May. Maybe I should have left mine outside like you did yours. Nice inspiration and a beautiful art piece that came from it. I absolutely love the beads.

wow there really wasn't much left! But you utilized it all brilliantly, I also wish I could see a close up!