You might have noticed that I like making thread wrapped buttons. There are just a few of my attempts displayed on Passementerie Buttons tab at the top of the page. Well, exciting news! Gina-B Silkworks now has an online course in making thread buttons. I learned my button making skills through Gina's DVDs but now it is available to anyone regardless of where they live in the world. The DVDs actually led to Gina asking me to join her design team and my projects are on UK national television regularly. So you never know where those skills will take you. 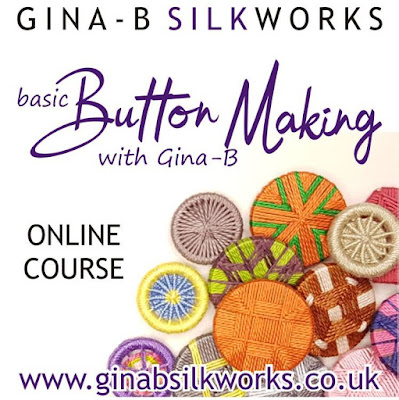 Although the buttons look complicated - believe me, I thought it would be impossible to learn how to make them - but it is actually a straight forward process that can be taken to all kinds of heights once you learn the basics.

I don't want to do the hard sell. I'm not a sales person. I want people to be inspired by what I make rather then talking them into buying new stuff. However I am VERY excited about this. I love making buttons. It was one of those totally unexpected hobbies that I never thought I would take to with such enthusiasm. And the cost is very reasonable - just £17.99 (roughly $23.84 US according to the currency converter on 22nd June 2018). Take a look at Gina's web site to find out more information - and prepare to become obsessed!

Posted by Gillian McMurray at 18:28

I received my copy of Colonial Williamsburg's magazine Trend & Tradition today and the do-it-yourself article featured embellished buttons. They've made it available online here: www.colonialwilliamsburg.com/learn/trend-and-tradition-magazine/button-up It should be interesting to compare their tailor's instructions with the technique which works so well for you. Next time I look at historic clothing I'll be sure to notice the buttons!