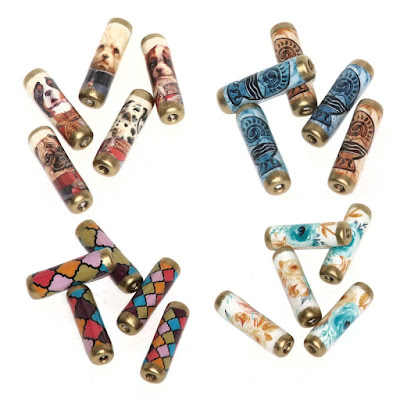 Just some new beads for this post. It has been rather quiet around home. My father took unwell two weeks ago so it has been all hands to the pump since then. He's doing better now but, as the saying goes, old age doesn't come itself.

I wanted to make some summery beads, which I think I did with the floral and Greek fish designs. But when I saw the dogs in military uniforms I knew I had to try and make beads with them. I have to say, they are my current favourites. The last set is called Moroccan Jewels - some nice strong, vibrant colours for summer.

As usual, the beads can be found on Etsy where I have also listed some new paintings. More about those to come soon.
Posted by Gillian McMurray at 13:20